Growth of the Entrepreneurial Environment in France – Nicolas, the founder of Iris Capital

Nicolas Du Cray, a partner of Iris Capital flying from France a day before “2015 Global and Taiwan’s Entrepreneurship Environment Communication Forum”, is one of the speakers in the forum who shared about his perspective in TMT (Technology, Media, and Telecommunication) industry investment, and its trend and development. Nicolas has 13 years of work experiences in TMT industry and also 7 years of experiences in Risk Management. 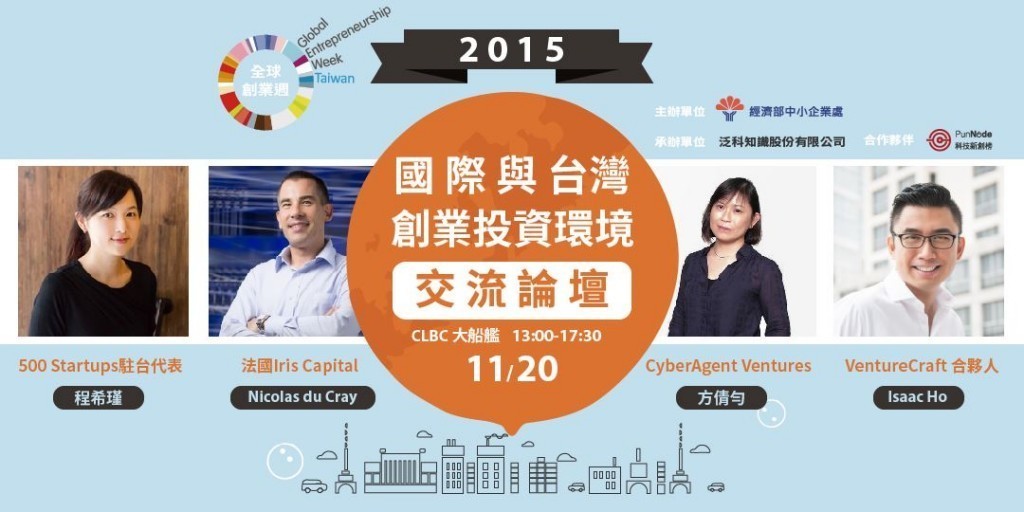 Global Venture Capitals Are Interested in Taiwan, Despite of Its Limited Innovation Environment

“Iris emphasizes digital economy, including cloud computing, mobiles, digital media and etc. Iris has offered €870 millions to over 200 enterprises, which covers companies in Europe, the United States and Asia. For example, TouchPal from Mainland China is one of the enterprises who obtained our investment,” Nicolas said. He also mentioned that even though Taiwan has a relatively small number of startups and investors, Taiwan has been an attractive country in which many global venture capitals are interested.

Nicolas also introduced the investment trend in France. “The relevant authority had started to look through the regulation again and started the regulation reform in promoting the innovation in France. The government supported the La French Tech project, which promotes the technology development in France. The project connected with stable French companies oversea to build a network, which allows startups in France to explore its opportunity abroad and at the same time attracts foreign venture capitals’ investment in France. The project is led by the French government, including BPI and Business France. We want to change the stereotype that the world see us. We want to let the world know that we have technology, too.”

Improving the Entrepreneurial Environment by Efforts from the Government and Enterprises

In addition, the President of France, François Hollande, announced “French Tech Tickets,” another important project for technology innovation policy. “Frecnch Tech Tickets, unlike La French Tech that connected with oversea French enterprises, aims to ‘attract foreigners to start business in France.’ As long as your team is composed of 3 members at most in a team (including 1 member who is from France and can speak English or France), you can apply for this project. The selected team can receive the advising lessons arranged by the French government, award of €12,500 and obtain the residency right supported by the government. The right of residency is the most directing factor to attract foreigners because it has always been a problem for foreign teams who want to work in France. We want to be competitive in the technology environment and build a global valley in France,” Nicolas said.

Enterprises contributed to improving the entrepreneurial environment by education and experience sharing. Nicolas shared an example from EEMI. The Internet school is composed of three famous enterprisers, Xavier Niel, the founder of Free, Jacques-Antoine Granjon, the CEO of ventre-privee and Marc Simoncini, the founder of Meetic, three of whom focus on the training of Web experts in the industry, to make contribution to the society.

Orange, another enterprise in France, established R&D Orange Labs and Orange Fab incubators to educate people. Moreover, Orange has its own venture capital “Orange Digital Ventures” that tries to perfect the training in the investment stage. Nicolas also mentioned the importance reformation in taxes, insurance and policy to build a friendly environment to global enterprises. “Especially the regulation of employment law and the benefit from social works,” Nicolas emphasized.

Where is “Orange” in Taiwan?

Currently in Taiwan, our government has started promoting entrepreneurial environment, including more flexible relevant regulations in investments. How about enterprises in Taiwan? Will those industrial leaders be willing to contribute something for this environment of startup business? Will we have a enterprise like “Orange” of France? “In fact, we can see some similar examples in Taiwan as well. Gogoro invested by HTC is one example. How about other famous ODM and OEM companies?” Nicolas said.

“It would make a huge difference if entrepreneurs, enterprises and the government have a common direction on improving the entrepreneurial environment.”