“Within few years, we will enter an era of robots, which also is my dream. I hope to build an interactive and diverse service for human beings. To achieve this goal, I devoted myself to the research and development of ‘human’ robots.” – Professor Hiroshi Ishiguro

Professor Hiroshi Ishiguro, “the father of modern robots”, also known as the invention of Humanoid Robot, was invited to speak in a “Innovation and Entrepreneurship Forum”. He shared his passion and interest in this field under the topic “The future of robots and the future’s robots.”

Why “Human” Robots? Why Not Creating Simpler Robots?

“Human’s brain can recognize humans – this is the reason why we make ‘humanized’ electric appliance,” said by Professor Hiroshi. “The ideal interaction with human is still from human after all.”

Since 1996, Professor Hiroshi has been working on the research on robots and also humans. “Just like other products’ research development, researchers at first need to understand the operation of human’s brain, the mode of thinking, and then they know which directions to go on robot developments.

“The research areas include human’s appearance, movements, perception, and conversations. We need to understand real humans to apply those experiences to build better robots. Currently, my robot has been installed over than 300 modes of movements and behaviors of humans. My daughter can get along with my robot for two hours and does not get bored.”

The next goal for Professor Hiroshi is to create Personal Robots. “Back to the time when I was in college, the size of computers is huge, and it cost 1 million USD to get one. What truly brought us to the era of information society is the development of smaller sized PC. If we want to enter the era of robots, people would need high efficiency but low price personalized robots. We are going toward that direction.”

Pepper, a robot developed by SoftBank Corporation and Aldebaran Robotics and manufactured by Foxconn, is a new start of robot industry. “Pepper is as tall as a child with artificial intelligence (AI) and learning ability. It can also have short conversation with human, and their emotions can also be shown on the tablet of the robot. Pepper can also develop its personality after interacting with humans. It costs 1,500 USD per robot, which is a fair price based on all characteristics of Pepper mentioned above.”

“I duplicated myself, and my daughter”

Professor Hiroshi showed a human robot of himself – the famous Geminoid. “Robot Hiroshi is not only for fun, but also a practical invention because Geminoid can share workloads for me. For example, if today I am going to introduce the invention of robots somewhere far from Japan such as in South Africa, the easiest way is to send the robot version of me to there. Geminoid can be divided into three pieces and put them into a suitcase. The first time Geminoid represented me, I went to the airport with my colleagues, watched Geminoid passing through the security. I was afraid that we would get caught, but those securities seemed to watch technology news that they knew it was a robot, and Geminoid eventually passed through the security.”

“In those talks where I stand on the stage as Geminoid, I talk remotely, and the computer read my voice and deliver them to the robot. The robot then reacts accordingly by recognizing voice. This invention allows one person to appear in two locations,” Professor Hiroshi said. However, how should we pay the “brainless and organless” robot? 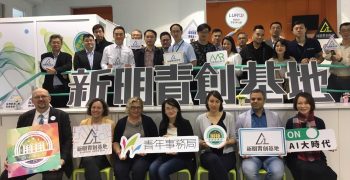 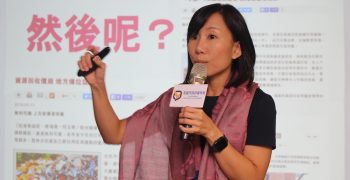